Yesterday, I went to my cousin’s daughter’s bridal shower. (Does that make her my second cousin??)  It was at a local bar, a very nice one actually, one I would enjoy visiting to watch a hockey or football game.  You know, at that point in my life when I actually have time to go to a bar and watch sports. 😛

The event was held in the “hockey room,” which I totally hated.  Ha ha, yeah right!  Actually, I was all geeked about it. 😀 I took lots of pictures, naturally.  I won’t bore you with them all, but here is one of me and my big sis with all the hockey stuff in the background. 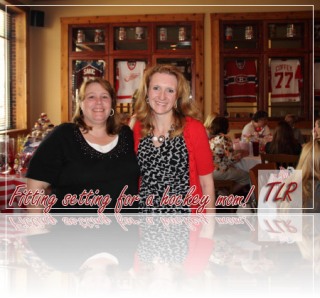 You can see the signed jerseys on the wall behind us, and unfortunately, my big fat head is right in front of the signed Ovechkin jersey, lol!

The bridal shower had the most unique theme I’ve ever seen–a carnival theme!  It was really cool and so fun.  Lots of clowns and carival decorations, and to top it all off…a carnival candy table… 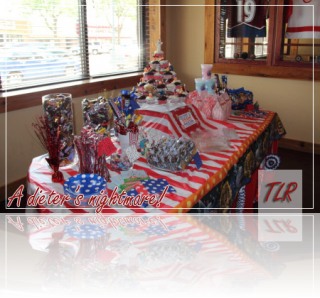 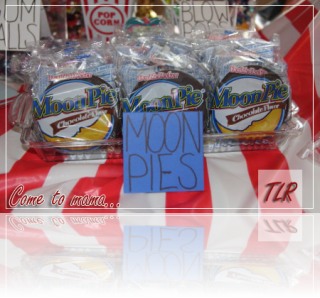 Yes, Moon Pies.  If you’ve never heard of a Moon Pie, well…I’m sorry you’ve been deprived. 😉 Truly, it is one of life’s delicacies.  Okay, not really, but I love them.  They’re dry and gooey and messy…and AWESOME!!  It has a lot of s’more elements, such as graham crackers, chocolate, and mashmallow, all wrapped up nice and neat. Here’s what it looks like inside… 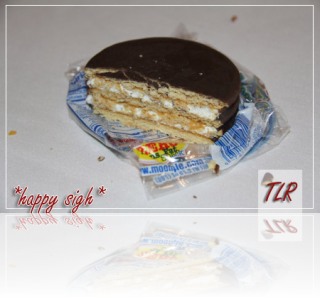 You can see in this picture that I cut it…I had the best of intentions to have just 1/4 of it.  But I made the mistake of taking the rest home.  Since they had pizza at the shower (I hate pizza–worst Weight Watcher food EVER!), I only ate salad, and I had plenty of points left at the end of the day.  So yes, I ate the whole thing–all 8 points of it, lol!  But it was worth it. 😉

However, when I woke up this morning, I knew I’d better get that run in to work off those points. I was surprised at how warm it was…70 degrees at 8am! I put on a short-sleeved race shirt and my UA pants and headed out.

You just have no idea how hot 70 degrees really is until you run in it.  I started out really slow, because I was running east and the sun was beating down on me. I knew I needed to conserve energy in the heat, and I did okay, I think.  When I turned toward home after a mile and a half, I picked up the pace a little, figuring it should be easier without the sun beating on my face.  I was wrong!  Holy crap, it was hard. I was pouring down sweat by the time I hit about one and a half miles.  I now know I need a sweat band or something…I got really sick of wiping sweat off my forehead!

When I hit the two mile mark, I really busted it, because I was ready to be done. (I say that a lot, don’t I?? LOL!)  I really hustled, and it was hard, but I did finally get home.  When I did, I looked at my weather station and about choked: 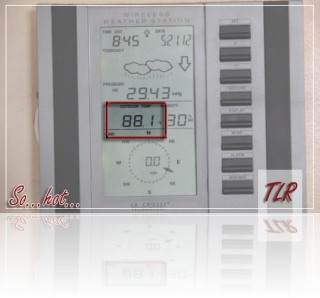 Yikes!  Now, granted, my weather station gets hit by the sun (a long-standing argument with my husband about where he placed it), but I was in the sun out there, too, ha ha!  Here are my splits: 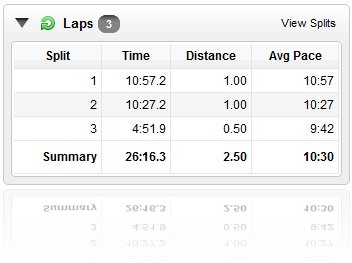 I was actually pretty pleased with my overall pace, considering how slow I started.  Another sub-10 last lap…yeah, it was only half a mile, but it was hot, too! 😛  Here is my timing. 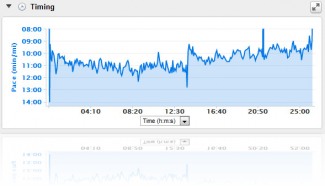 I always find it interesting to look at the timing and see how my run progression goes.  I have no idea what a good timing looks like, but I figure as long as I’m running, that’s worth something!  And since I did manage to lose that pound I gained last week at my weigh-in this morning, I think that’s worth something, too. 🙂

I felt like I deserved a reward for that hot run, so I did something I rarely do and went crazy with condiments this morning. LOL  I love English muffins, but I usually only put a small amount of Brummel and Brown butter/spread on them.  If you haven’t have the B&B spread (made from yogurt), go try it!! I think it tastes 1000 times better than margarine OR butter, and it’s only 1 point for a whole tablespoon! (Normal butter is 3 points per tablespoon.)  Today, I slathered it on pretty good, and I even went so far as to put on some of my homemade blackberry jam. 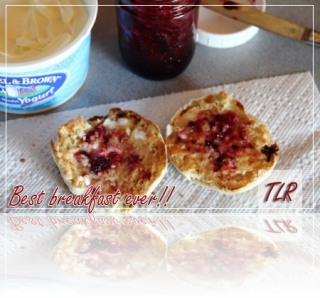 Oh how I love my blackberry jam.  I do indeed make it myself, as well as raspberry and strawberry jam every year.  Strawberry jam time is next month, so I’m sure I’ll have a picture or two to share about that fun process! 😉

I still owe a hockey photography post from last week, but I’ve been so busy taking pictures lately, I haven’t had time to put the post together.  Hockey photos tomorrow, I swear!