Man, I am one tired girl. But then again, when you run nine miles non-stop, that can be pretty exhausting!! 😉

Yes, I am happy to report that I did indeed successfully finish my nine-mile run at the Metropark today. 😀

When I got to the park about 8am, it was pretty stinkin’ cold for mid-May.

Ugh. I thought my cold-weather runs were behind me! 😛

I started out at a pretty slow (for me) pace, not wanting to push myself too hard. Because I truly believe that the hills at this park were a major cause in my knee injury, I ran the hills (both up and down) very slowly. It wasn’t a walk, but it was pretty close. I’m glad I did, too, because I could feel my IT band straining with each incline and decline.

I ran the same route I’d done 7 weeks ago, and I have to admit the first 3 miles were a challenge. I don’t know if it was stress or what, but I really felt like I was struggling. This was surprising to me, because I was going at a pace that was much slower than my usual pace. When I hit three miles, my knee hurt (again), but not horribly so, and I kept on. I felt better after mile three, and that helped propel me to the “top” of the Metropark, where I would turn around and head back to my car.

When I hit the turnaround, I could feel anxiety set in. It was right after the turn-around that I hurt my knee the last time. But, thankfully, I passed by that spot and nothing awful happened. I kept going, focusing on taking the steep decline very slowly so that I wouldn’t hurt my knee.

About a mile after the turnaround, I began to pass people walking or jogging in the opposite direction. There were men, women and children, and I could clearly tell by the apparel that they were all Arabic/Muslim. All of the women were wearing those head scarves that cover their hair and neck (I don’t know the name and don’t want to embarrass myself or offend anyone by relying on the Internet and possibly getting it wrong!). Some of the women had the full robes in addition to the headscarves. Most of the kids and many of the men all had on the same shirt that looked like a typical cotton race t-shirt, with some sort of logo on it. The men and the kids were walking and/or running. What really amazed me, though, were the women who were wearing the full robe and scarf who were running! That’s a pretty impressive feat in my mind!

As the folks began to pass me, I offered encouragement to them, especially to those women who were running in the full outfit. I could tell that this was some sort of health event, based on the signs I’d seen (more about that in a minute). Each person that I encouraged seemed really appreciative of my support, especially the runners (even the kids!). I got lots of smiles and thank-yous each time I spoke to someone. One lady in particular, who was in the full outfit, was going along at her slow but steady pace, and I was struck by the huge smile on her face. I made sure to give her extra support as she went by, and amazingly, her smile got even bigger! 🙂

For me, it was very enjoyable to offer encouragement to these folks, because I’m kind of a “natural cheerleader” anyway, and I love to help make people feel good. Not to mention it gave me something to think about other than my own run!

I mentioned the signs a few paragraphs ago, so let me explain. Along the route, which was about 2 miles long, and seemed to be a 4-mile out-and-back, they had placed signs with quotes about good health and clean eating. Some were Arabic proverbs, many were from the Qu’ran (I think that’s how it was spelled on the signs), and others were from our founding fathers! 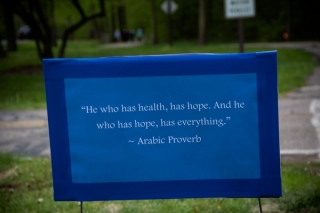 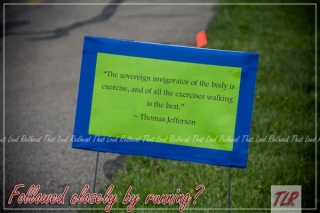 I have to say, seeing those signs really brightened my day! It was like little well-placed words of encouragement on my path to help me along my way. I decided this morning that if I was ever going to help organize a race, I would put signs with quotes on the route. Of course, if it was a race meant to be run, I would make the quotes shorter and the letters bigger so they could be read as the people ran by! 😉

I passed the end of the marked course at about 7.5 miles, and I decide at that point that, since I was feeling pretty good, I was going to finish strong. I’d averaged about a 10:30 pace up to that point, and I really, really wanted to do a sub-10 for my last mile. I turned on everything I had, and guess what? 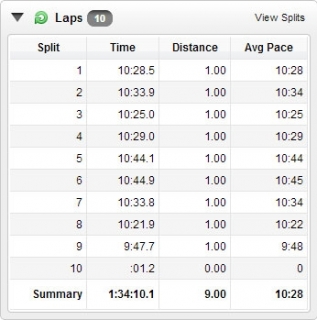 I did it! I not only finished the run, and I not only ran it non-stop, I even finished strong! As soon as I hit nine miles I stopped and immediately took a picture. 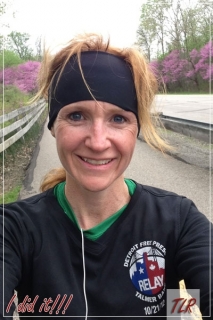 I really love this picture because it reminds me of how happy I was when I was done with my run. I felt so damn accomplished, like I really could do anything!! A little while later, after I’d gotten to my car and done some stretches, I went back to take some more pictures. Here’s a shot of me showing off my nine miles completed. 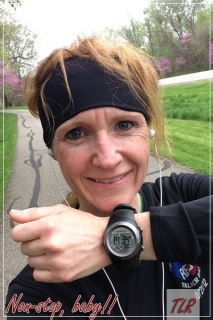 You might notice the red bud trees in the background of those pictures. I love redbuds, and once a few years back, I mentioned to my husband how much I loved seeing all the red buds in bloom in my mom’s neighborhood, and how I always wanted to have one of those trees in my yard when I was growing up. The very next year, my husband bought me a redbud for Mother’s Day! 🙂 They’re in full bloom right now here in SE Michigan, and I’d been wondering if there would be any at the Metropark for my run. Well, yes there were! 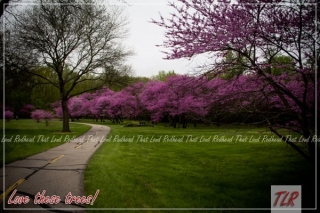 There were tons of them, actually, and it really brightened my run. Considering how cold it was this morning, I needed a little spring cheer! 😉

After I took the shots of the trees is when I went back and got pictures of the signs. I stopped to talk to one of the “guides” for the health event and discovered that it was a gathering of a western Detroit Arab Muslim group that was affiliated with a school. The lady that I spoke to was so nice and very enthusiastic about their health and fitness event…she even invited me to the picnic they were holding after the “race”! I wish I had had time to stay, because, being the loud redhead that I am, I totally would have reveled in crashing their party! 😉 Sadly, though, I had a busy day ahead of me and couldn’t stay.

Okay, that’s enough about my run. I am soooooo tired tonight. After my run, I spent 2 hours taking pictures of a friend, and then I spent the afternoon and evening making a meal plan and then grocery shopping (with two kids). Now it’s almost 11pm and I need to get to bed, because as accomplished as I feel after running 9 miles today–I have to run another 3.1 miles with my son tomorrow! I’ll be tired, but I can’t think of a better Mother’s Day gift than to be able to run with my son. 🙂

Thanks so much to everyone for the encouragement and support these last seven weeks, especially. You have all helped to get me through this rough time, and I am hopeful that I am finally on the way back up from rock bottom with this injury!