Saturday morning, I dragged both kids out of bed at 6am (on a weekend in the summer–oh, the humanity!) so that we could be out the door by 6:30 for the Wyandotte Run 4 Art 5k.  All three of us were running–we are racing warriors in the Loud Redhead family! 😀

The Run 4 Art race coincides with the annual Wyandotte Art Fair, which is really a neat event that I’ve had the pleasure of attending several times in the past.  Wyandotte is my favorite Downriver town, because 1) It’s a history lover’s dream, and 2) It’s just a wonderful example of a typical Midwest town.  I could rhapsodize forever about it, but suffice it to say it’s worth a visit if you ever get the chance. 🙂

Back to the race!  The night before the race, I asked Jamie was his plans were as far as his finish time.  After his previous runs, which were pretty slow due to the heat, he decided that he would attempt to simply beat his best 5k time to date, which was 31:58.  He admitted to me that he really wanted to do a 10-minute-per-mile pace, which would put him at about 31 minutes.  His comment was, “If I can do a 10:13 pace for 6 miles, I should be able to do a 10-minute pace for three, even in the heat and humidity.” I agreed, and then I asked him if he wanted me to act as his “pacer,” since I knew he’d done well with a pacer for the last race.  He seemed to really like that idea, so I agreed that I would be the official 10-minute-per-mile pacer for the Wyandotte Run for Art 5k. 😉

After we arrived, we first had the kids’ half-mile “fun run.”  DS#2 (aged 7) was signed up for it, and we’d run a half-mile a few times in the last month to get him ready.  He was a bit cranky when I woke up him (understandable!), but he brightened up before the race. 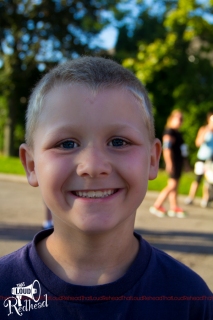 He lined up and was very serious about things. 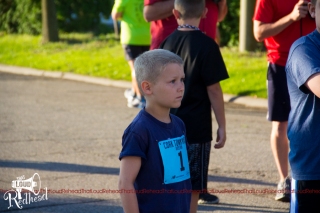 When they blew the starting horn, he was off and running! 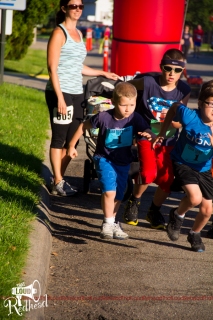 Isn’t he awesome? 😀  What I loved most about him was that he ran out with a smile on his face! 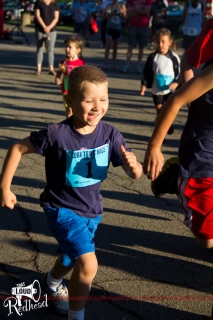 He ran as fast as he could, but he got tired after the first quarter mile. 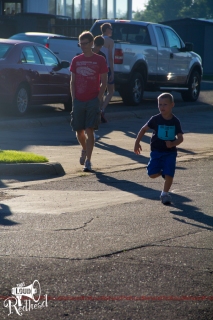 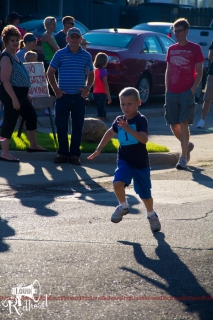 I could see that he was exhausted at the end, and it was only sheer determination that got him across the finish line. 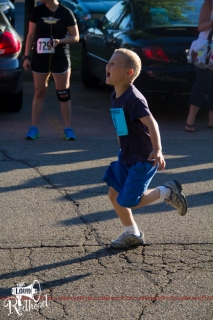 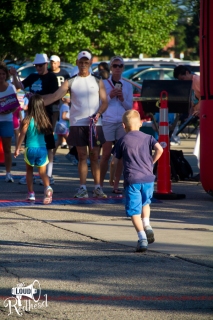 I was so proud of him!

After the half-mile kids run, it was time for the 5k.  Jamie and I lined up with all the other runners in front of Portofino’s Restaurant.  Thank you to my brother-in-law for graciously taking all the rest of the pics.  He did a great job! (He knows me well, and knows I love pictures. ;)) 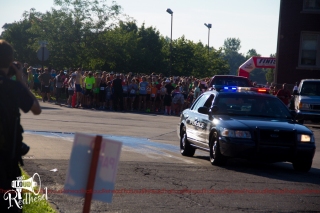 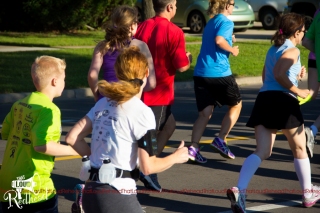 It was a pretty small race, so it wasn’t too hard to find a spot and get into our groove. 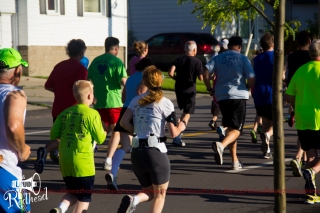 For the first mile, I secretly decided that I would I let Jamie set the pace.  I didn’t want to push him too hard, but I also didn’t want to hold him back.  He did well, actually.  He kept asking me in the first mile what our pace was, and I told him I wanted to wait until we were done with the first mile to know for sure what it was. (I didn’t want to discourage or overly encourage him, since I knew he’d fixate on the number either way.)  What he didn’t know was that he maintained a 9:30-9:40 pace until the last quarter mile, when he told me he was tired and I let him slow down, but he still ended that first mile with a sub-9:50.  I was impressed, but unsure if he could hold it for the next two miles.

At the beginning of mile 2, he asked me what our pace was again, and I told him the truth: he’d been sub 9:40 for the first 3/4 of a mile, but that he was getting slower and his second mile was above a 10-minute pace.  Much to my astonishment, my sweet little boy actually yelled at me! “But I’m following you!” he blurted out angrily.  “You told me you were going to keep us on pace!”

Well, if that didn’t put me in my place…er, pace.  😉  I had indeed promised that, but I had instead kept up with him, instead of the other way around.  I quickly responded, “Well, kiddo, you’re right, I sure did.  I’ll keep the pace from here on out, and you can just follow me.”

And for the next two miles, we did that.  I kept our pace at about a 9:50, knowing that he’d want to take a few water breaks and thus building in a cushion.  At one point, I told him he looked good and we were back to a sub-10-minute mile, and a lady running with us joked, “Wow, I need you to run with me for all my races!”  It made me laugh. 😉

We looped back to the starting point about halfway through, where my brother-in-law snapped a few shots. 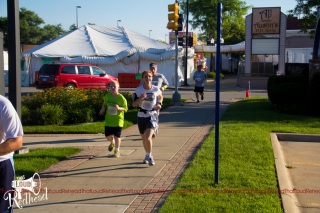 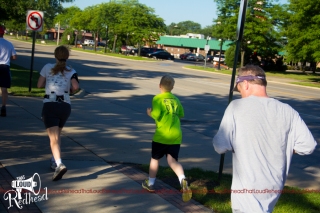 He was tired, but he was still plodding along, keeping pace with me as best he could. They had the one and only water station right after this point, and I was encouraged that he was able to joke a little bit as we slowed to take the water.  We walked for only a few moments before starting up again.  I maintained a slightly below 10-minute pace, with the intent to walk again if there was another water station.   As we got close to mile 2, he asked me if we could walk again and have some water (I had brought a hydration belt, thankfully–I was rather bummed that they only had one water station!).  I knew he was getting really tired, so we went ahead and stopped right after mile two.  We walked a little longer this time and then we started up again.

That last mile was pretty tough.  He was breathing really hard and I knew he wanted to slow down.  As his mom, I really, really wanted to slow down for him–it’s hard to see your baby struggling.  But at the same time, I remembered him yelling at me earlier in the run for not being a true “pacer.”  It was such a struggle internally for me–was I a coach or a mom?

In the end, I knew he’d want me to be his coach first, and his mom second, so I continued to work toward getting us back to the 10-minute pace (we’d stopped to walk at the beginning of the last mile, so we had to make up for it).   I could tell it was hard for him, but he didn’t complain (maybe a groan or two toward the end, lol), and although he fell behind for a while, he caught back up and rounded the corner toward the finish line. (Look for his lime green shirt below.) 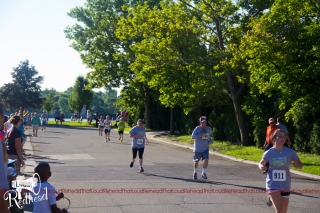 Here we are crossing the finish line together–with an amazing 30:28 time!! 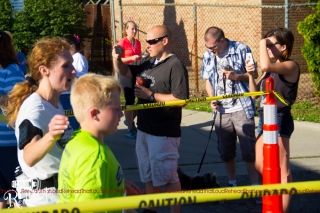 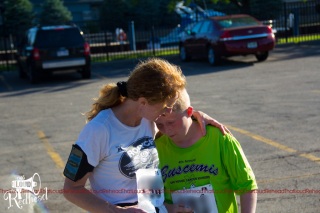 And I was so proud of him!  After I hugged him tightly and told him how proud I was, I let him go off on his own for a moment.  I’ve learned that I have to let him just do his thing in the moments after a race, because he zones a bit from the exertion and it takes him several minutes to have a coherent conversation.  After a few minutes, I was able to convince him to pose for a family shot before my sister and brother-in-law left. 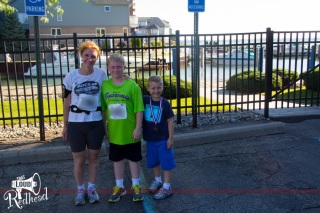 He’s still a little tired there, as you can tell.  Eventually, he perked up enough to go enjoy the free pancake breakfast. 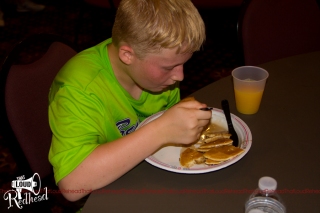 I let DS#2 have my breakfast.  Both my boys really like the post-race food. 😉

By the time he had some food and drink in him and had cooled off, I could tell he was happy with his accomplishment and proud of himself for finishing in such a good time. 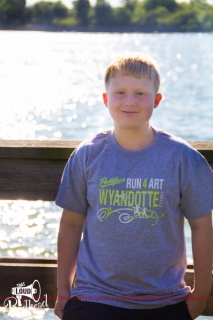 That’s him after the race, sporting his newly-earned race shirt on the Wyandotte riverfront. I was so, so proud of him, not only for beating his previous 5k time by a minute and a half, but just for running the race in the first place.  Jamie is not a “natural” runner by any stretch, but he works so hard to train and to get better and faster with each run. And as far as I’m concerned, that’s all he really needs to do! 🙂

Thank you for reading and following along with his story!