In a race? Ha ha ha ha, of course not!  But I do have some other activities in my life besides running. 😉

But first, we’ll talk about running.  I was up at 4:30am yesterday morning to run five miles.  Dude.  Even I think that’s crazy as I sit here and type it.  LOL!  But although running before sunrise is certainly not as fun as, say, sleeping in 😉 , there is definitely a feeling of accomplishment when it’s over.   It was an “easy” run, with my target pace range being 10:43-11:33.  I enjoyed the quiet time as I ran this morning, and although my splits were kind of erratic, I was happy to look at my overall pace when I was done. 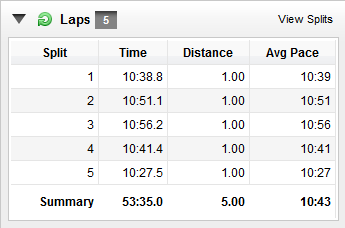 Exactly at the bottom of my range, lol!

So, back to my winning ways:  I’m honestly not sure if I mentioned last week that Thursday was the day to take items to the local fairgrounds to enter in our county fair.    You can read all about my past forays into fair entries, including last year’s experience, here.

This year, besides my jams, I entered my awesome oatmeal cookies (that’s what I call them), as well as my zucchini bread.  I also encouraged the boys to enter pictures, especially Jamie, because he really does love to take pictures.  He entered these two: 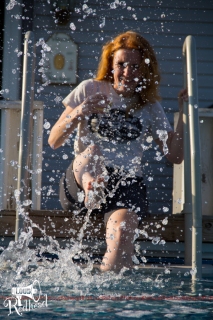 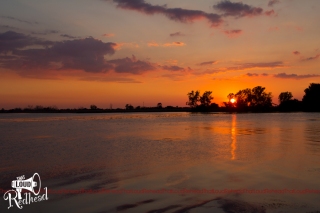 The first shot (of me, obviously) was an entry in the Candid class, while the second was in Scenic.  DS#2 entered two shots as well, one in Animals, and one in Candid. 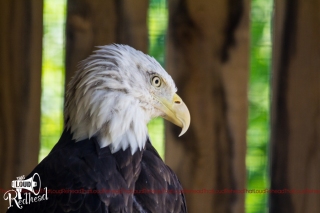 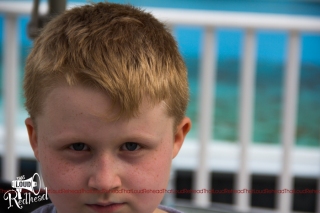 I also entered a few pictures I thought were nice, one Scenic, one Macro. 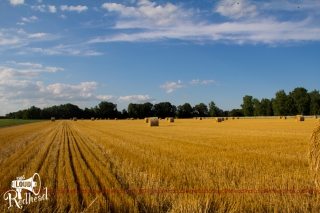 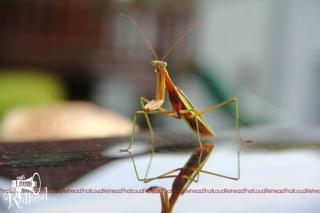 Unfortunately, neither Jamie nor I won anything for our photos.  I wasn’t overly ecstatic about my wheat field pic, but I did like the praying mantis one quite a bit—I thought it was a neat example of a close-up shot. However, the pictures in that category that won were butterflies and flowers. Guess my big ol’ bug wasn’t quite the judges’ cup of tea. 😉

I thought Jamie’s pictures were pretty decent, especially for a youth entry, but unfortunately, we noticed Wednesday night (long after the judging) that he had accidentally switched his tickets, so that the candid shot was entered in scenic and vice versa! 🙁  It’s my fault for not checking before I left, but I wanted him to have the responsibility of entering his own pictures.  Oh, well, lesson learned for us both.

Meanwhile, DS#2 was thrilled to get third place for his candid shot of his brother (taken when he was all of 5 years old!). 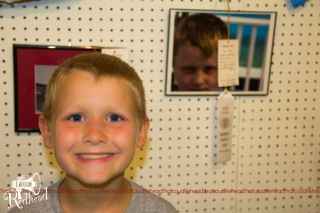 His first question when he learned he won a third-place ribbon was, “When do I get my dollar?” LOL!

And finally, the best news (for me): my jams did great!  My raspberry (which I didn’t think was all that good) won third, my blackberry took second, and my strawberry jam once again took first! 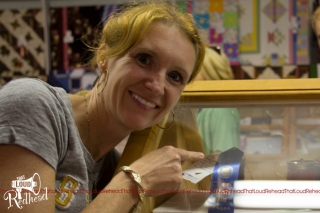 Totally proud of that, because of all my jams, I think my strawberry is the best (and the one I work hardest on!).

We had lots of fun at the fair, although we got rained on quite a bit. My husband was able to come, and I can’t remember the last time we had a family outing with all four of us, since his work schedule has been so erratic and unpleasant. 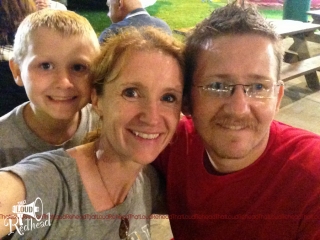 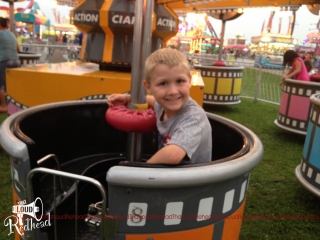 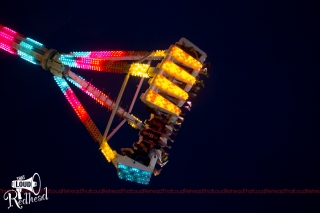 In that last shot, Jamie is the kid at the very bottom of the ride, with his hands up in the air, lol.  Each kid got a chance to ride 3 rides, and we all got to enjoy a little bit of fair food in the form of a yummy funnel cake. 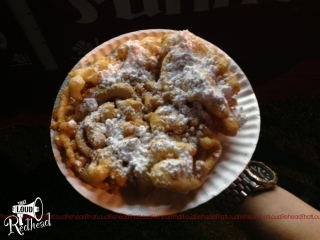 Did you know that one of those little buggers has 27 points?! Holy crap!  I only had a few little pieces, which I determined to be about 1/8 of the whole thing, and that was plenty.  I wasn’t going to have any fair food at all, but I decided that a little bit of funnel cake wouldn’t kill me.  Especially since I knew I’d be running 5 miles the next morning!

I haven’t talked about my weight in a while, so I suppose it’s time for an update.  The last time I published my weight was three weeks ago, and at the time, it was 116.4.  I have been weighing myself each week as I usually do, but not posting the results, because I’m trying to “let go” of the desire to focus on the scale.  It’s hard, let me tell you!  This week’s weigh-in was… 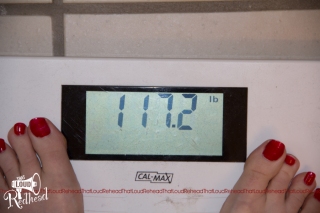 I’ve been hovering right around that 117 mark for the last month or so, which should probably be expected since I’m now in “maintenance” mode (aka, eating more points per day).  Still, in a way, it’s frustrating, since I’m exercising so much.  Besides running, I’m also doing strength training, and it just feels like there should be a loss with all that exercise.  I haven’t been eating all my activity points.

For the heck of it, this week I decided to measure my waist.  I knew I’d measured it some time in the past, but I couldn’t remember when or what the result was, so I thought maybe I might find that it had dropped a bit.  The results surprised the heck out of me:

Dude—I’ve lost an inch in my weight in the last 8 months!  I measured it three times to be sure, and that’s what it said every time.  Considering that I’ve gained almost 2 pounds in that time, I think that’s pretty impressive.  It occurred me to me that I’ve been working out (strength training) regularly since March, and although I knew that I was feeling more definition in my arms and even my legs, it didn’t occur to me that I might actually be losing some of the fat around my waist.  And yet—I’ve noticed that my size 4 pants (bought in January of this year) are fitting a little more snugly in the thighs, while the waist is just fine.

I won’t say I’m in love with having bigger thighs (*snort*), but I like that my arms are much more defined than they ever have been, and my waist, though not perfect, isn’t all that bad, either.  What this shows me is that my body composition seems to be “adjusting,” as it were.  Do I love it? No…not yet.  Maybe I will learn to, but at least for now, I think I can feel like I don’t hate it.  And that’s definitely a start, right??

Tomorrow morning I’ll be getting up bright and early to drop my kids at my sister’s, then run 4 miles to the start of a race, and then run a 10k! Yes, I’m crazy, but I have 10 miles on the schedule tomorrow, and that was the best way I could think to get it all in.  As I mentioned last week, my family reunion is this weekend, and I’m excited that my brother, who is in town from North Carolina, is going to be running the 10k with me!  My brother has actually competed in triathlons, and normally I wouldn’t dream of keeping up with him, but he had knee surgery last year and is just starting to get back into running. So chances are good that I will actually be faster than him tomorrow.  I’m kind of excited about it, because if I can pull it off, it will be the first time ever that I will be able to out-run my big brother. 😉

My training classes start back up next week for the next two weeks, so I may be a bit sporadic in posting, but I’ll try to come back and report on my race results as soon as I can.  Thanks so much for reading!!