Finally, I’m done with the training class I’ve been facilitating for four weeks!!

I’ve been pretty darn tired the last month, since I’ve had early mornings (getting up at 4:30am to run before heading into the office early) and late nights (hosting dinners with managers).  It all ended on Thursday, but on Wednesday, my husband’s aunt came to stay with us for 6 days. She is super-sweet and also tries to be helpful, but it’s hard having a houseguest because it really messes with the routine, you know?  So I’ve been trying to catch up on life and blogs and, of course, tomatoes, as quickly as I can!

I’ve kept up with all my half-marathon training, barring the occasional postponed run (never more than a day).  I’ve run three days a week, with intervals on Monday, easy runs on Thursdays, and long runs on Saturday, plus strength training twice a week.  Since I’ve had to be at the office early every day for the classes , all this training means I’ve seen a lot of sunrises (and pre-sunrises) in the last month! 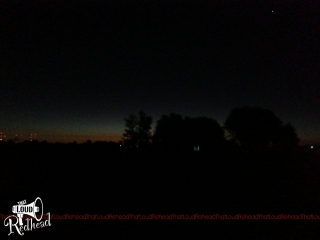 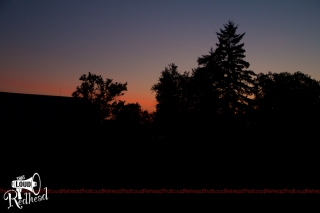 The good news is, my interval training has been going great!  Unfortunately, my long runs haven’t been so great.  🙁  I’ve been increasing mileage and increasing the number of miles at “race pace” each week. (My race pace is 9:55, which is what I need to run to meet my goal of a 2:10 half marathon next month.)  All of my runs have four miles of easy running (two on each end) with a varying number of race pace miles in the middle.  In the last four weeks, I’ve increased from three race pace miles to seven, but I haven’t been able to successfully run race pace for all the required miles since doing three back in early July.  In fact, my last two runs have been so bad, I was nearly in tears.  I just can’t seem to run the necessary number of miles at a 9:55…my lungs just can’t handle it.

I mentioned to my friend Katie that I was having difficulties and feeling very discouraged.  (Katie developed my training plan for me.)  She gave me some pointers, and then, even better, she offered to run my next long run with me! I was supposed to run 8 easy, but I really wanted to try the 11-miler from the previous weekend again, since I had failed to maintain RP for the 7 miles.  Even though her normal pace is much faster than mine, she agreed to go at my pace for the entire 11-miles, which meant 9:55 for seven and then really show (up to 11:59!) for four.

I decided to run all the race pace miles in the beginning, because I felt like doing two miles first was making me too tired.  Katie was kind enough to plot out our course and drive, so all I had to do was show up, turn on my Garmin, and then never look at it again.  I thought that I’d have a hard time not looking, but I just changed the display to the time of day, and I never thought about it.  It beeped for each mile, which helped me mentally so that I had some clue where I was, but other than that, I let Katie dictate the run.  And it was so much fun!  I struggled a bit at first, but I decided to take my Gu in smaller portions, and earlier, which helped.  When we hit mile 4.5, right after my second Gu, I was feeling great—I actually asked her if we were going fast enough, lol.  Once I hit mile 5.5, though, I was back to wishing we could slow down. 😉 I wish I knew what was going on with my body that I get these severe ups and downs…but I don’t. 🙁

The run Katie chose was an out and back, and it was going well until we got back to the very busy main road, and we were forced to stop.  I was so frustrated, because we were in the last race pace mile, and I was really hoping to get all 7 miles at race pace.  I didn’t stop my Garmin, but Katie did, so hers showed us going faster, of course.  At that point, I pulled up my pace to look at it and I saw we were behind. We worked really hard to make up that stop at the end.  We didn’t quite make it…but we were close enough to have a great 7-mile pace! 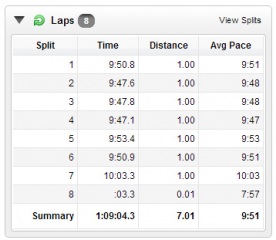 Though I was tired, I was so happy to have finally done the required number of RP miles! Don’t get me wrong…I really needed the 4 miles of recovery  that we ended up doing at 11:00 pace, but it felt good just to accomplish that 7-mile goal.  When we were done, I made sure to get a picture of us. 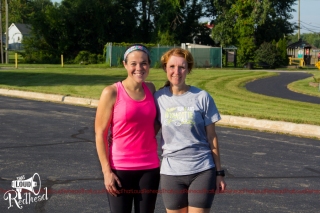 I also got one more picture of me in the freezing cold pool when I got home. 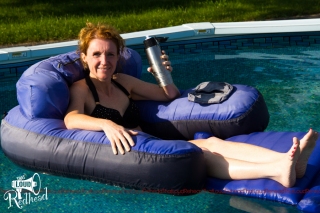 It felt so good!!  (Sorry, Katie…next time I’ll remind you to bring your swimsuit so you can join me! 😉 )

I was so thrilled that Katie had made sacrifice to run slow with me. And, as an added bonus, during our run, I’d mentioned that I was looking for a dress to wear to a party the next day, and she freely offered up anything she had!  I visited her home later and chose one that I’d seen her wear on the website a few times; I’ll plan a separate post for that. 🙂  Truly, friends are God’s gift…I know I would have never made it through that run without her.

That’s enough for now…thank you so much for your patience during my little hiatus.  I still have lots of tomatoes to do, and hockey is starting up again as of this week, but I promise to be more punctual with my posts!