Saturday morning, I was up bright and early to do my 12-miler, because I knew it would take me 2+ hours and that I had to be out of the house no later than 9:30am to get to the hockey team car wash.  I wanted to have an hour to wind down from a very long run!  Because I didn’t have much time, I chose to do the run as (many) out-and-backs in my neighborhood, versus going to a park or trail to make it one long out-and-back.  I prefer to run my long runs somewhere a little more exciting than down my road and back (a gazillion times), but I knew that wasn’t an option that day.

My hope was to get out the door by 6:30, and I was so proud of myself…the time on my Garmin was 6:31am when I started!  I ran a crazy route that had me back and forth in mile and half-mile increments, but I felt like it would be enough to keep me from getting too bored. I took plenty of water with me, and some Shot Blocks, which was a first for me.  I usually use Chocolate Gu (not ashamed to say I find it yummy!), but I don’t like to take it all at once, and it gets messy when you take it in thirds.  I bought some chocolate cherry Shot Blocks, and while they weren’t my favorite, they weren’t bad, either.

The goal was to do 8 miles at race pace (9:55) and then four miles at easy pace.  Since my last long run of 11 miles (7 at RP) was successful but still a bit of a struggle, I really worried about maintaining a 9:55 for 8 whole miles. I started out faster than I anticipated, and that freaked me out.  Starting fast is usually a recipe for disaster!  I continually worked to slow down, but for the first several miles, I was maintaining not a 9:55, but a sub-9:50!  I took a half of a Shot Block every two miles, and I was surprised to find they worked pretty well. I was actually feeling pretty darn good, and my route had enough turns and changes to keep me from getting too bored.

By the time I hit mile 6, still going sub-9:50 for every mile, I began to think that maybe I would try for nine miles at race pace instead of eight.  My training plan (developed by my friend Katie) had me doing another 12-mile run the following weekend, this time with 9 at race pace, but I knew I wouldn’t be able to do it because it’s Labor Day weekend, when I have a non-stop salsa- and spaghetti-sauce-canning fest. Katie had already told me it would be fine to cut back the week before my half, but I was still worried about not getting to nine miles at race pace before the actual race.  I thought if I could do it that day, then I would feel more confident.  And thus, my goal changed mid-run, becoming 9 miles at race pace, with 3 easy.

That all sounded really good until about mile 7.5.  It was at that point that I began to feel tired, and, surprisingly, my legs began to hurt.  My endurance issues have never been my legs throughout my training…it’s always been my breathing and cardio that give out first.  That morning, I was feeling it all over.  At that point, though, I was in for a penny, in for a pound, as they say.  There was no way I was going to quit on my new goal until I dropped from exhaustion, so I just took another half a Shot Block and pushed through it.  By the time I hit mile 8, I was still tired, but with the knowledge that I only had a mile to go, I was re-energized.  So re-energized, in fact, that I not only managed to beat my goal of 9:55 for 9 miles, I killed it! 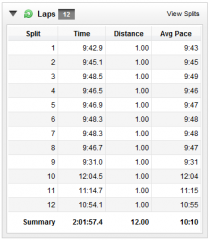 You can see I managed to do a 9:31 for that ninth mile!  It worked out to an amazing 9:44 average pace for NINE miles!!! That’s unreal for me!!  I walked for not even a tenth of mile after that, and then I jogged the last three–that in itself was a major accomplishment!  I was positively thrilled with my overall pace… 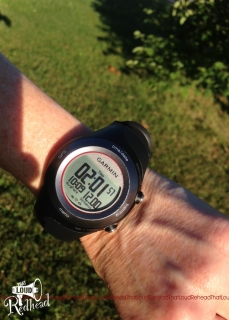 Dude!  I cannot even believe I did 12 miles at a 10:09 pace!  (The final stats in the table above are off by a second per mile because I hit the watch timer by accident for a split second after I took the picture, lol!) I was just over-the-moon excited…that’s way faster than any long run I’ve ever done, and 9:44 for 9 miles is pretty incredible for me. 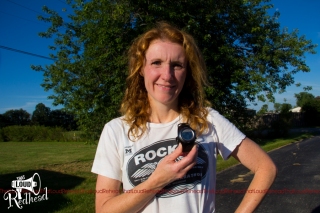 Amazing that I can look hot and tired and yet happy there, isn’t it? 😉  Still, with that jubilation came a sobering realization…the difference between that run and all my other long runs (that didn’t go so well) was one simple thing: hills.  There are absolutely no hills in my neighborhood.  Not a freeway overpass, not a bridge over a river, not even a slight incline when crossing the railroad tracks.  Saturday’s run felt so much better than my previous runs, I knew that it was the slight inclines, bridges, and overpasses in all my other long runs that were causing my breathing and endurance issues.  All my short runs are done at home, so the hills became an issue for me when I would “travel” for my long runs, since I don’t do them nearly enough.

But, the truth is, I can’t worry about that now.  I’m two weeks out from the race, and I don’t really have time to add in any major hill work.  I will do the best I can in Chicago, and pray that the “flatness” of the course is all it’s hyped up to be. 😉

After my run, I had a little less than an hour to recuperate before I had to head out the door for the car wash.  I didn’t even have time for my beloved cappuccino, so I stopped at Starbucks on the way and treated myself to an iced latte (soooooooo good, and just what I needed after that hard work!).   Then, I spent four hours on the side of the road, dancing and shouting and waving a sign at all the cars that passed to encourage them to stop and have their car washed by our adorable hockey players. 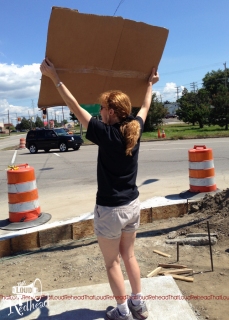 One thing about being a loud redhead–it’s a great combination when you need someone to stand on a street corner and advertise a car wash. 😉

After the car wash, I took DS#2 to a birthday party, then went home and cleaned up the house a bit, went and picked up DS#2 from the birthday party, and then came home to make dinner.  I gave in when the boys asked and agreed to eat dinner in the living room on TV trays since I was so tired.  I sat down with my laptop and my plate of dinner, with the full intent to do a quick blog post on that night’s recipe, which is one of my favorites. 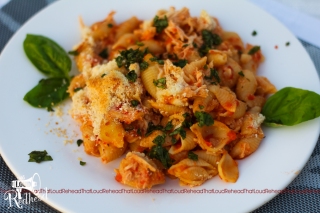 I was excited because I had earned so many activity points in the day that, even with the very pasta-heavy dinner, I had plenty of points left for a treat later.  I took a few bites of dinner, typed about 2 lines of the blog post, and then I thought, “This movie the kids are watching is really annoying. I’m just going to close my eyes for a minute and tune it out.”  So I did…and the next thing I knew, Jamie was gently shaking my arm, saying, “Mom, I think you need to go to bed. It’s 10 o’clock.”  Holy crap! I crashed right there on the couch, leaving most of my dinner untouched!  My dear sweet son had actually put my dinner and the remaining leftovers in a container and put everything in the fridge, and even cleaned up the plates and cups.  What a sweetheart. 🙂  It was way past the kids’ bed time, so although I was mad at myself for leaving so many “points” on the table for the day, I took the boys upstairs, tucked them in, and then I crashed for another 10 hours!  I honestly can’t remember the last time I was that tired. 😛

All in all, though, it was a good day, and I’m so very glad I had one last good long run before my half.  Just two more weeks!!!  I guess you’ll have to wait until another day for the dinner recipe. 😉

Thanks so much for reading!!