After crashing and burning on Saturday night, I woke up Sunday positively starving, and with a gazillion or so points left to use before I lost them all on Sunday night. (My Weight Watchers week restarts on Mondays.)  Dessert is always foremost on my mind, and I toyed around with ideas of what I could make that would satisfy my sweet teeth but not be overly complicated (because I was still tired!).

I found this in my blog feed Sunday afternoon.   I’m not normally a banana bread fan, but a tropical version, with pineapple and coconut, sounded interesting.  My favorite eat-out dessert of all time is a tropical banana pudding from the ‘Ohana restaurant at Disneyworld (I just found a recipe for it here, which I am now going to insist my husband attempt to recreate!), and this sounded like a neat alternative.  Plus, as an added bonus, I had three bananas that were sitting on my counter, definitely past their prime. 😛

Unfortunately, I didn’t have any pineapple or coconut, so that idea was shot pretty quick.  I did some Pinterest searching and found a recipe from the very famous Smitten Kitchen blog (this recipe is from 2006—clearly she was blogging food before blogging food was cool!).  It looked good, and I had all the ingredients, so I gave it a try.  I lightened it up with Brummel & Brown spread instead of butter, and ½ cup brown sugar instead of 3/4 cup.  It looked pretty good when I threw it in a bowl. 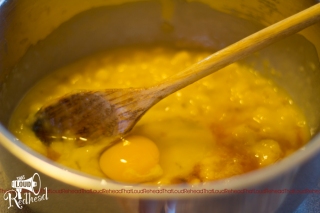 The recipe indicates a mixer isn’t needed, but I think next time, I would rather put the bananas through a food processor for a few seconds.  I like my ‘naners to be good and processed when in bread or cake.

The recipe calls for bourbon.  I know nothing about alcohol, so I had to ask my husband if we had any.  We didn’t, but he said this was a fine substitute. 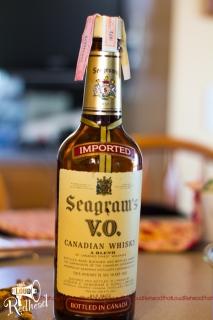 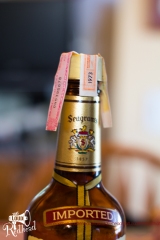 He told me to make sure I got a close up of the state seal on the neck of the bottle, showcasing that it was originally produced (and probably purchased) in 1973.  Dude…this whiskey is almost as old as me. 😉 I believe he got it from his grandparents’ home when they moved into a nursing home about 5 years ago.  You can see that we are not big hard-liquor drinkers in our family, since it has barely been touched in 5 years.

The recipe called for a tablespoon, but I decided a teaspoon would be more my style.  Unfortunately, while I was pouring it, I was laughing with my husband about using 38-year-old whiskey in my recipe, and I accidentally put in a little more than I had planned. 😉 It was probably a full tablespoon, but for me, that seemed like a lot! (I would never just drink this stuff straight.)

It all mixed up nicely with just a wooden spoon, and it went into the pan nice and easy. 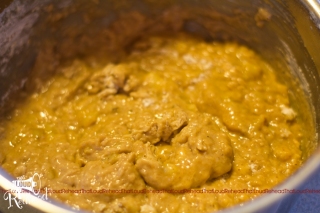 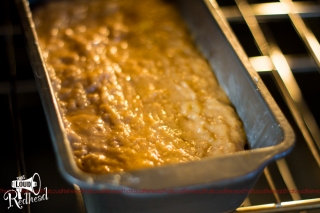 I cooked it for about 55 minutes, using the convection feature of our new oven.  It sure came out looking beautiful. 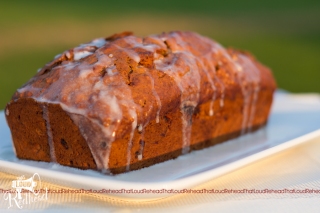 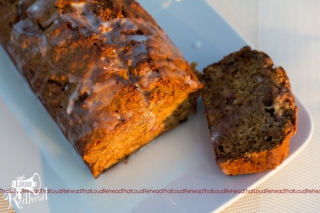 As suggested in the recipe, I took my first bites while it was still warm from the oven.  I must say, I was not excited about it.  I didn’t like the texture or the taste. 🙁  So you might be wondering why I would even post a recipe I’m not crazy about.  It’s true I didn’t care for it much on Sunday, but after my husband put it in the fridge overnight…oh, oh…then the joy became real. 😀  It clearly needed to sit a day (and be chilled) for the flavors to really blend together.  By Monday late morning, I couldn’t stop eating it! 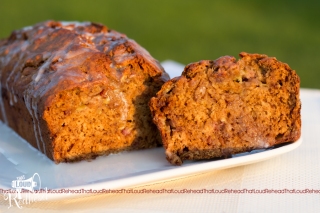 The good news is, with my simple changes, the recipe isn’t too point-heavy.  If you like big (1-inch) slices, it would be 6 points each, but I prefer smaller slices (about ½ an inch), and those are only 3 points each.  Plenty filling, and very yummy.  I debated using wheat flour for it, but decided that since the points would be the same, it wasn’t worth the trouble.  However, I might try that next time, just to see if it’s more filling.

I highly recommend this bread if you have some bananas that need to be taken care of. It was definitely a great “long run” treat!

Banana Bread with a Kick

Preheat the oven to 350°F. With a wooden spoon (or with a food processor), mix butter into the mashed bananas in a large mixing bowl. Mix in the sugar, egg, vanilla and bourbon, then the spices. Sprinkle the baking soda and salt over the mixture and mix in. Add the flour last, mix. Pour mixture into a buttered 4×8 inch loaf pan. Bake for 50 minutes to one hour, or until a tester comes out clean. Cool on a rack. Remove from pan and slice to serve.

Glaze: Mix 1/4 cup powdered sugar with a tablespoon of milk and drizzle on top.

1 thought on “Banana Bread with a Kick”