Did you miss me??  I missed you all!  I’m sorry for being such a bad blogger, but I just simply could not keep up with my blog this past week and a half.  There’s been so much going on.  For starters, I don’t think I mentioned Jamie’s newest venture… 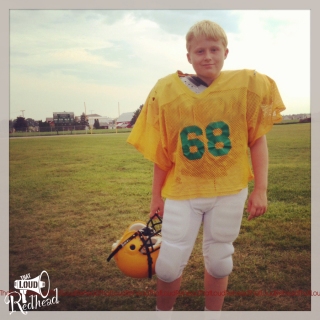 Yes, that’s right, my hockey-player son is now my football-player son as well.  If one more person asks me, “Hockey and football? How are you going to make that work?” I may be forced to take a hostage. 😛 I don’t really have an answer to that question, to be honest.  However, Jamie has been begging me to allow him to play for three years, and my husband (former high school football captain) finally overruled me this year.  So, a hockey and football mom is what I am.  And let me tell you, trying to keep up with both schedules (as well as DS#2’s hockey schedule) is wearing me very thin these days.

Besides the hockey and football, Jamie is still running, too.  We’ve cut him way back on that, though, because we don’t want to exhaust the poor kid!  The chances of him doing the Chocolate Run 10k in November are pretty slim, but he did still ask to do the Lung Cancer foundation 5k later this month.  That was the first 5k he ever did, and he seems to have fond memories of it, because he was really insistent on doing it again, despite all his other obligations!

Last week, on Monday, I had my last set of interval training.  It was 3x1600s, which is three one-mile runs really fast, with half-mile walk/jog breaks in between.  I told Jamie that he could run the last mile and a half with me (a half mile rest break and then a mile cool-down) to keep up with his running.  We agreed that he’d meet me at the corner by our house when he saw me coming back up the road near the end of my run.

Because it was my last set of intervals, I decided to really push myself.  I knew I’d do sub-9 minute miles, but even I didn’t realize how fast I could go when I put my mind to it. 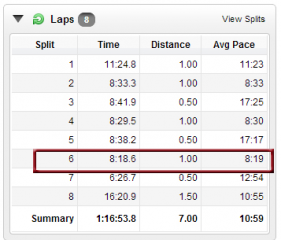 Look at that—an 8:19 mile!!  I worked so hard for that mile.  My lungs were practically bursting by the time I was at the end of that mile, and I was staring at my Garmin, begging it to beep and tell me I was done.  Just as I rounded the corner, I heard something else behind me, but I wasn’t sure what it was.  I turned and looked, and it was Jamie, running as fast as he could to keep up with me! At that moment, my Garmin finally beeped and I had to come to a full-on stop because I was so exhausted.  Poor Jamie—he looked devastated!

“What are you doing?! We’re running!” he cried.

If I hadn’t been so tired, I would’ve laughed.  Instead, I bent over, gasping for air, and choked out, “I gotta stop, buddy.  I just ran the fastest mile of my life!”  He looked a little miffed to have to stop, so I staggered down the road for a tenth of a mile and then we jogged another 1.4 miles to get him to 1.5.  By the time we were done, I had enough energy to jog another half mile to make it a nice even 7.  I thanked him for running with me; it was really nice to have Jamie out there with me at the end. 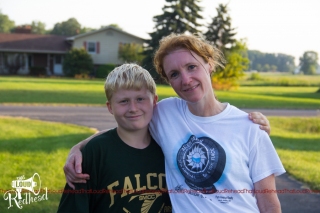 He is such a great motivator for me. 🙂

The following day, I wanted to get in another couple of miles, just to try to build up my endurance a bit. I ran two miles down the road and back while Jamie was at football practice, and DS#2 biked alongside.  He was so patience—he’d bike up ahead, then stop to wait for me.  It was quite hot that day, and when we got home, we both jumped in the pool (I didn’t even change into my bathing suit!). 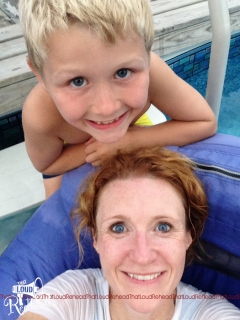 The weather has been crazy this summer, and there hasn’t been enough pool time, so we were happy to take it when we could get it.

Speaking of our crazy summer weather…last weekend was my annual canning weekend, and this year’s weather really took a toll on my canning schedule.  Normally, by the time Labor Day weekend rolls around, I have at least 180 pounds of tomatoes from my garden already processed and frozen, ready to thaw and throw into pots on the Friday before Labor Day.  This year, because of the excessive amount of rain we had in late June and early July, the vast majority of our tomato plants died before producing any tomatoes. 🙁  We only got 90 pounds from our garden, and this meant I had to buy a great deal more from the farm market. (Ouch.)  How many more? About this many: 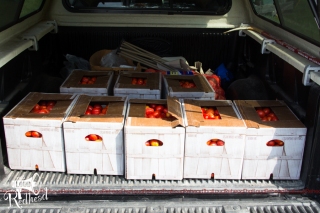 That, plus the small bit I had left from the garden, is 240 pounds of tomatoes, all of which I had to process (blanch, peel, core, quarter) this past weekend.  Normally I only have to do a max of about 180 pounds in a weekend (usually less), so this was a daunting task.  Add to that the fact that my husband was working Friday and Saturday (he never works the end of the week during Labor Day weekend) and therefore couldn’t help me…well, let’s just say it was not pretty.  But wait, there’s more!  The raspberry crop was also terrible this year, and although I bought raspberries on Saturday at the local farm market (from two different growers), I had to throw all of them out because of bug or worm infestations! I nearly had a nervous breakdown when that happened.  I ended up having to go out and just buy them at the local produce store, but of course, those weren’t local at all. 🙁

All this drama eventually led to something that hasn’t ever happened to me in ten years of doing this:  I couldn’t get it all done in four days.  I actually had to take an unscheduled PTO day on Tuesday, and I didn’t finish it all until 9pm Tuesday night. I ended up with 54 quarts of salsa, 39 quarts of spaghetti sauce, 20 half-pints of raspberry jam, and 8 half-pints of blackberry.  That’s so much less jam than I usually make. 🙁

When it was all done, it looked like this: 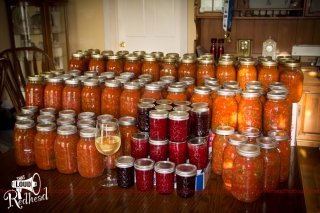 Let me tell you, I really deserved that glass of wine! 😛 I spent most of the weekend on my feet, chopping or stirring or canning.  Without my “heavy-lifter” (aka, my husband) to help me, I had to lift 45-pound bushels of tomatoes over and over again.  I can say that all the strength training I’ve been doing seems to be paying off…while lifting those bushels of tomatoes wasn’t fun, it wasn’t as hard as it used to be. 😉

So that was my weekend.  I did manage to get in two runs during the canning extravaganza, one eight-miler on Saturday morning (when I was still feeling enthusiastic about life and tomatoes), and one on Tuesday morning because I felt like I needed to run to just clear my head after some issues with the kids’ school.  I was exhausted by Tuesday night, though, and I realized that a weekend of canning was probably not the best way to spend the last weekend before running a half-marathon. :/    I went to bed late and was up early every morning, and all that time spent on my feet and lifting bushels of tomatoes was really rough on my body.   As I was doing it all, and especially when I got to the last few days, I decided that canning is definitely an endurance sport. 😉

As I write this, I’m looking around me at all the unfolded laundry and feeling a bit panicked because I leave for Chicago in an hour and a half, and I have yet to pack! 😛  So now I’m off for a fun weekend with girlfriends, only slightly interrupted by a 13.1-mile run. 😉  I’m really nervous about meeting my 2:10 goal, but I do feel confident that no matter what, I’m pretty much guaranteed to beat my last half-marathon time (my only half-marathon time, lol!), which was 2:16:17.

I’ll be back next week with a race report—thanks so much for reading and being patient with me while I was away!