By now, my love of desserts should be pretty apparent.  People ask me why I run, and I am pretty honest about it: I run because I love to eat, and I especially love dessert.  One of my favorite desserts is apple pie.  Perhaps it’s the result of having a fall birthday, but I adore apples in any form—pies, breads, pastries, whole, cut up, you name it, if it has apple, I will almost certainly eat it. I’ve actually been dying to share one of my favorite apple recipes, but wanted to wait until it was officially apple season.  As it turns out, though, that one has been usurped by the dessert I made on Sunday.

In my mind, the best thing about running a half-marathon is the number of points you earn for running 13.1 miles. My race on Sunday earned me a whopping 19 points (for reference, I get 26 points in a day).  I knew even before I left that I wanted to have pie as my post-race treat, and I even mentioned it to my husband.  I was delighted to discover when I arrived home that he’d stopped at the orchard around the corner from us and bought me some fresh apples! (Note that he also bought himself a jug of cider, which is his own personal addiction.)

Last year was a terrible year for apples in Michigan, due to the abnormally warm temps we had in March for multiple days in a row, followed by seasonal (cold) temperatures.  All the blooms died, and both apples and cider were at a premium last year.  This year, it has been extremely rainy (the paper reported yesterday that we had 3 times our normal summer rainfall this year!).  I guess rain is great for apples, because, based on the production of my own crabapple tree, they are in abundance! 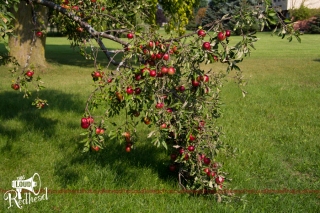 I’ve never seen them so plentiful before! Makes me wish I had the time to make some crabapple jelly, but sadly, I do not.  So, they’re wasting away on my tree, but they sure do look beautiful. 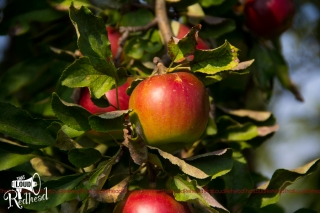 At any rate, the apple-lover in me is tickled that they’re so plentiful this year, and even though I’d run 13 miles and then sat in a car for 5 hours for the trip home on Sunday, I still got right in the kitchen when I arrived and made myself an apple pie.  I used two recipes, both of which are hard-copies that are showing some age. 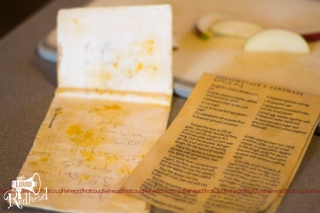 The one on the right is the pie recipe, which I cut out from my local paper several years ago (I’m not even sure how long it’s been!).  I had to do some digging, but I’ve figured out that the recipe comes from a book called Sweety Pies, which you can find at Amazon here.  (The recipe on the left is one of those great relics that true bakers love: it’s my mom’s pie crust recipe, and you can find the recipe as well as the story behind it linked below.)

I have another apple pie recipe that I’ll share another day, but I saw this one in the paper and it just spoke to me.  The title was “Grandmother’s Homemade Apple Pie,” and when I looked it over that first time, it seemed to have just the right mix of sugar and spice and apples.  I gave it a shot, and when I tried it the first time, I was hooked! 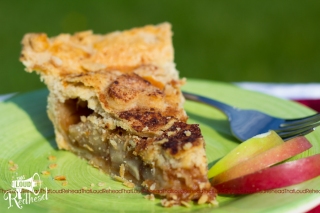 Now, when I want a traditional double-crust apple pie, this is the one I go to.  It’s positively perfect! (When made with my mom’s crust, of course.) 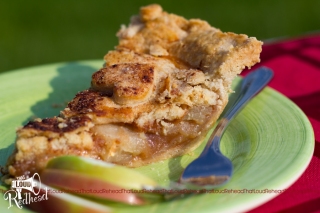 I’m sorry I don’t have a picture of the whole pie, but I ate two pieces before I ever got around to taking pictures. 😉  Hope you enjoy it!

Preheat oven to 375°. On a lightly-floured surface*, roll out half the dough to fit a 9-inch pie plate with a 1-inch overhang.  Line the pie plate with the dough. Refrigerate the crust and remaining dough until needed.

Place the apples in a bowl and sprinkle with lemon juice; toss lightly to coat.

In another bowl, combine both sugars, the flour, spices and salt. Sprinkle this over the apples. Toss the apples until well-coated.  Pour the apples into the prepared crust and dot with the butter.

Roll out the remaining dough on a lightly floured surface and place it over the apples.  Trim the edges, then pinch and flute. If desired, use the scraps to cut out pretty designs (I like hearts, personally, cuz I’m a girl). You can use the egg wash to lightly brush on the back of the cutouts to make them stick. I also like to brush the egg wash on the entire top crust and sprinkle with a mixture of cinnamon and sugar.

Bake until bubbly and golden brown, about 55-60 minutes. I strongly recommend covering the edge of the pie with tin foil or with a pie crust cover. (I bought mine at Pampered Chef a few years back and love it!)

The recipe says to let it cool on a wire rack for 30 minutes before serving. Ha! Fat chance. 😉 It does make the pie a little more solid to eat, though.

Top it with ice cream and your life is awesome!!! 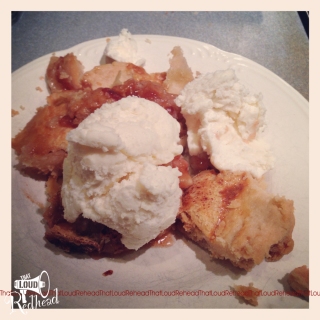 *I use a pie disk that comes with a cover for both the disk and the rolling pin. I love it because it ensures the crust doesn’t stick to the surfaces, but without adding in all that extra flour that makes the dough dry!  You can find the covers online, but the set (which actually comes with a round and rectangular disk) was a gift, so I have no idea where it came from.