Last Sunday (a week ago) was my son Jamie’s first anniversary of running.  Technically, it was Monday, since he ran on September 16, 2012, but basically, it has been one year since his first-ever 5k.  Back in the early summer of this year, after he finished his second 10k, I asked him what other races he might want to do this year, and he specifically mentioned doing the GFLCF 5k, because it was his first time ever running in a race, and he had good memories of it.

As we got closer to the date, I was concerned, because he was doing football and hockey, and my husband and I felt it was just too much to ask him to run on top of that. This meant he wouldn’t actually be training for the race.  🙁  Not ideal, but he wanted to run the race, so I signed us up for it in August.

When the school year began, and he added 6am wake-up calls, homework, 4-days- a-week football practices, and 3-days-a-week hockey practices, his enthusiasm for running really waned.  I wasn’t sure if he would even do the race, but I’d already signed us up for it, so one week out, I asked him if he could run it.  He’s never one to back down from a challenge, so of course he agreed.

The race didn’t start until 10am, so we were able to sleep in some.  I even had time to go take some sunrise pictures. 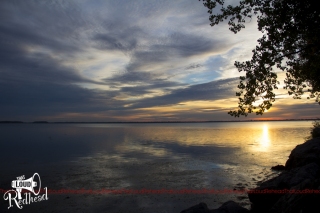 Once I got Jamie up and moving, we left DS#2 at home with my husband and set out for the long drive to Kensington Metropark.  It was nice to have some one-on-one time with Jamie.  On the way there, we chatted about school and music and just silly stuff.  (He is really into electronic dance music right now, and gave me all kinds of information about it, ha ha. 😉 )

I’d forgotten my purse, so we had to double-back and we got there with only about 20 minutes to spare. Phew!  We had someone snap a quick shot of us after we got our packets (we’re wearing last year’s shirts, which I actually like—love that blue!). 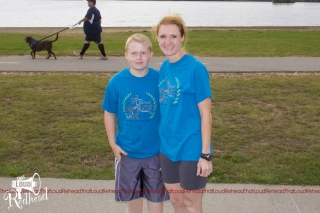 Not so happy about the photobombing man and dog. 😛

After securing our bibs and stretching, we lined up to run.  A quick selfie… 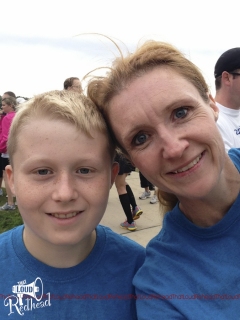 And we were on our way!

On the drive up, Jamie and I discussed his intentions for the race.  Back in July, when he’d run the Wyandotte run in 30:28, he’d mentioned that he wanted to try for a sub-30 at his next 5k.  Of course, that was before we knew his next 5k would be in the middle of hockey and football season.  He’s been doing football 4-5 days per week and hockey 3 days per week, and the days overlap 2-3 times per week.  Add school and homework into that, and it’s a lot! I knew his body was probably pretty exhausted, but I also knew how competitive he was. When I asked him what his goal for the race was, he hesitated.  I told him he could run whatever he wanted, and he still wasn’t sure what to shoot for.  Finally, I told him we could shoot for a sub-30, but that he was allowed to slow down whenever he needed to.

We started out at a 9:35 pace, which in retrospect was way too fast.  🙁  By the time we hit the first mile, I knew he was struggling, but, being the stubborn kid he is, he wouldn’t stop or even slow down on his own.   When we got to the turnaround at the half-way point, he grabbed a bottle of water from the bucket being manned by the teenage girls that were volunteering for the race.  He started to open it as he ran, but I knew at that point that that a sub-30 was not in the cards for him, so I ordered him to walk as he drank.  He argued for a minute, but I could see he was relieved to rest.  He walked for a few seconds and drank, and then he started back up again.  I took the bottle so he wouldn’t have to worry about it.

There were more small hills on this course than I remembered from last year, and by the time we got to mile 2, I knew that he was tiring again.  I told him to walk and take another drink, which he did. I knew he was tired, because he didn’t argue this time!  After a few sips, he started up again, and he continued until mile 3, when he sped up for the last tenth of a mile, like he always does. 🙂  We crossed the finish line within a second or two of each other, and I was so proud of him!

I knew he’d struggled more than he would have liked, but despite all the hard work he’s been doing in the last month, he still managed to finish and even run a good race!  The race is timed, but it’s not a chip time—it’s kind of “loosey goosey” in that they use a stop-watch and then collect our tags at the end.  Unfortunately, the lady in front of me had an issue with her tag and couldn’t get it off, and I believe that caused his “official” time to be delayed…they had me finishing at 30:50, but his official time was 31:27.  Since he was right behind me, I know that’s impossible!  So, I’m giving him credit for a 30:52 finish, which is his second-best 5k time, and still under a 10 minute mile, which is great for a kid who only ran a total of two times in the month before!

His time still managed to snag him second place in his age group. 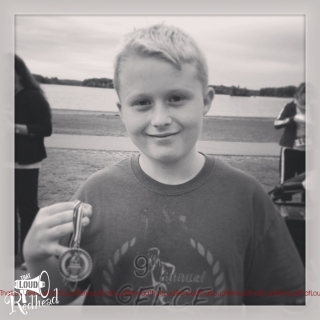 As it turns out, the kid who took first place in the under-13 age group actually signed up to walk the race…and then finished in 27:27! Seriously?! I was kind of ticked, because I felt like Jamie deserved first since he actually signed up to run, and wasn’t just some speedy little snot who comes to walk and then runs on a whim. 😛  I mentioned it a couple times when I was telling family members about Jamie’s run, and finally Jamie said to me, “Mom, just let it go.”  😉

I was rather concerned after this race as to whether or not Jamie would want to run again.  I know he was frustrated with his performance, and I worried that he’d become soured on running since he hadn’t beaten his best time.  However, at the end of the day, he began to perk up.   I was cleaning out a drawer and came across all my running medals.  I didn’t realize until I had them all spread out just how many I had! 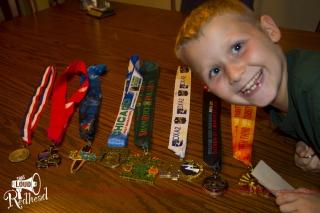 (And yet another photobomber, lol!)

When Jamie saw all my medals, he immediately ran upstairs to get all his medals—hockey and running! 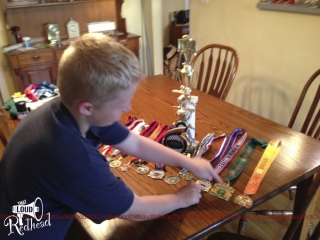 When he was done laying them out, they were a pretty impressive sight, especially with the added trophies (all those trophies represent first- or second-place finishes in hockey tournaments). 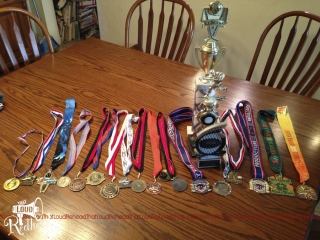 And then he felt the need to really show them off. 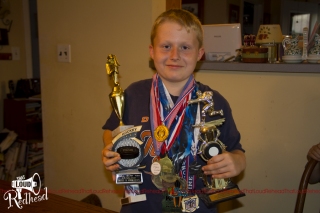 Ha!  I’m surprised he didn’t topple over. 😉  At any rate, when we were going through them all, he noticed my Rock CF medal (the first 5k I ever participated in—I speed-walked it!), and he commented that he’d really like to run that race next year.  Then we began talking about the Kona Running Company medals, and we both agreed they’re really nice.  He’s still bummed that he’ll miss out on the chance to get the “triple crown” medal, due to a hockey tournament falling that same weekend.  However, after some discussion, we agreed that he could still run their “Chocolate Run,” purely for fun. (And chocolate!)  We also discussed a few other runs next year, so I feel a little more optimistic about his running future.

My husband and I both agree that we want to keep encouraging the running as kind of a “side venture,” because it’s so good for him.  And seeing how happy it makes him when he improves upon his times is a great feeling—for him as much as us, I think! I think he’s feeling a little better about running now that he’s had a few days to relax after his 5k.  Yesterday, he ran a mile down the road (just to keep him in running form), and when he returned he said, “I felt great! I could’ve run another half-mile at least!” I told him it’s better to take it easy, since today he has a hockey and a football game!  But I admire his enthusiasm. 😉

So, another race on the books for my pre-teen son. 🙂  He proudly told me on the way home Sunday that he’s now run 8 races in a year.  That’s a pretty impressive feat for anyone, I think, but especially for an eleven-year-old hockey player!

The posts will be slow for a bit as our family works through the hockey and football schedule.  But I’ll be doing some hockey photo posts soon, which may not be what the majority of people come to my blog to see, but it’s how this blog got started, and I love ’em! 😀