I will not win any blogging awards this year, that’s for sure. 😉  But there is a delicate balance of life that must be maintained, for all of us, and right now, mine requires that I put blogging on the back burner for a bit as our family works to get into the routine of a new school year and a new hockey season.  Because I don’t want to be completely devoid of a blog presence (and because these updates are more important for me in keeping a record of my life than they are for anyone else!), here’s a snapshot of what’s going on in the Loud Redhead household.

It was four weeks ago that I had my second half-marathon, in Chicago.  My goal of a 2:10 finish was blown to heck with the heat and humidity, but I still finished more than a minute faster than my previous time, so it wasn’t a complete loss.  Plus, I had fun with my friends!  However, the competitor in me is still striving to meet my goal.  Although I swore two half-marathons would be enough for me in one year, I have decided that I’m going to run a third one in November.  It’s very local (very), and I’m hopeful that the cooler weather as well as the easier logistics will help me have a better run.  Maybe not a 2:10, but I feel confident I’ll have a new PR!

To that end, I’ve been running consistently since I took that week off after Chicago.  In fact, I’m following the same training plan I was following before, only I’m now adding in an extra short run during the week. Hopefully, that will help me build up my endurance, since my problem during runs seems to be that I get winded when I go to long at race pace.

I ran 9 miles this past Saturday, and I decided to try running my “race pace” miles at the beginning instead of in the middle, and I’m happy to say I not only had a good race pace run at 9:43 average (goal is 9:55), I didn’t even have to walk during the “easy” portion of the run.  In the past, I would always walk for at least a little bit after finishing race pace.  This time, I just took it down to a jog and held it for the next four miles.  That was 95 minutes of non-stop running! It was a foggy morning, which made it really difficult to run on the road, but I managed.  I wish I could’ve stopped to take a few pictures as the sun was rising over the fog—it was beautiful! Instead, you’ll have to get by with this cool shot of a spider web on my neighbor’s mailbox. 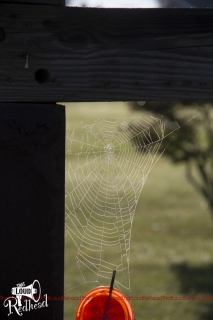 It’s been a looooong time since I talked about my weight, hasn’t it? Two months, to be exact.  Maybe that’s because it hasn’t been a pleasant topic! 😛

As I’ve mentioned for pretty much the last 6 months, I’ve been struggling with the 6-9 pounds I gained when I hurt my knee. I gained a few pounds in April, right after my injury, and then, even when I got back to running, I kept gaining. It’s been frustrating because I haven’t gone off plan, and I’ve been running 3 times a week. It’s one thing to see the scale go up when you know you’ve made poor choices, but that hasn’t been the case with me. 🙁  I just couldn’t seem to get it off, and I ended up with my highest weight of (gulp!) 121.8 right after my half-marathon in Chicago. Considering my goal weight, which I maintained from October 2012 to March 2013, was 113, you can see why that caused some panic! 😮

I was discussing it with a friend a few weeks ago and she made a pretty astute observation: she said that my body is probably becoming more efficient at running and doesn’t need to burn as many calories.  While I’ve been running consistently, I’ve also been eating all those activity points consistently, but it’s likely that my body doesn’t need the extra fuel like it did when I first started running. That makes sense to me! So I’ve decided to not use all the activity points for a while and see what it does for me.  At the same time, I’ve been adding in an ab workout three times a week to give my body something “new” to shake it up a bit.  I’m happy to say that I’ve had four weeks in a row where I’ve consistently lost weight—really consistently, as a matter of fact: I lost exactly 1 pound per week for three weeks, and then today, I lost .8. 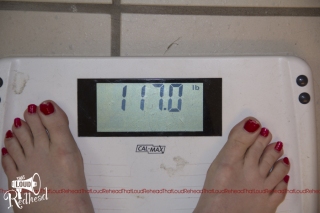 I won’t lie; I jumped on and off the scale at least four times to try to get it to 116.8 so I could have a full-pound loss again this week (not to mention be under 117 for the first time in 3 months), but my scale is maddeningly consistent. 😉 Still, I’m happy to be going in the right direction for a sustained period of time, so I’ll just keep doing what I’m doing. Of course, my birthday is Friday, and then we have a wedding to attend on Saturday, so that may make things a bit tricky. Wish me luck! 😉

Hey, this is still the most important part of my blog in my opinion! 😀  And now that hockey season is back on, I’m enjoying the opportunity to take pictures of my boys and their teams again.  Jamie is doing well, although he’s already had 2 penalties in only two games. 😉 But he’s working hard, and that’s what counts! 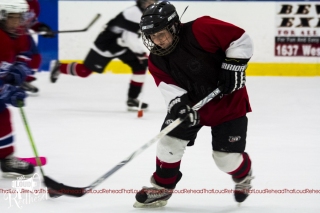 DS#2 is having a great season so far.  He is the only 2006 playing on a team of all 2005s (for you non-hockey folks, that’s their birth year), and he’s really holding his own.  His new coach has decided to play him as a forward (offense), and while he was a bit unsure of himself in the first game, he’s really taking off in his new position and he’s making his parents really proud.  He actually scored his first full-ice goal on Saturday, BUT, the ref waved it off. 🙁

“But, Mom, the kid never had it covered!” he told me afterwards.  It happens!  Still, despite the disappointment, he bounced back and is continuing to play aggressively and with enthusiasm.  I know he’ll get that first goal very soon.

I’m getting into a better groove with my photo processing and tagging, so I plan to have another hockey picture post soon.  In addition, I have a bunch of new recipes I’ve been trying, so I hope to have a new one up soon.

That’s enough for today.  Thanks so much for reading! My goal for the rest of this week is to finish tagging pictures and then to catch up on my blog reading!

PS:  If you’re wondering about the “feature” photo of this post, it’s a shot from my high school’s homecoming game, which I attended last week to watch my nephew in the band. I thought it would be a nice photo to showcase for this post. 🙂