If you clicked here for a diet-friendly recipe, well…just move on.  This is not the the recipe you’re looking for. 😉

On the other hand…if you’re all about chocolate (like me!!!), stick around and prepare to have your taste buds and possibly a few random strangers singing praises about your culinary prowess.  Because, as far as desserts go, this recipe rocks!

I decided it was time to post a dessert recipe this week, in honor of a conversation I had at my Weight Watchers meeting recently where I came to the defense of dessert. 🙂  I love dessert and almost always make room for it when budgeting my Weight Watchers points.  As a matter of fact, when I went out to a business dinner on Monday night, I was the only member of our group who ordered dessert: a huge slice of 7-layer chocolate cake.  (Go big or go home.)  I didn’t care that no one else was ordering it–when I go out to dinner, I have dessert! 😀

So, because dessert has been on my mind (I say that like there are times when it’s not on my mind), I bring you this delightfully decadent treat. This is another recipe I got from my friend J’nice, and has become one of my “classics.”  I get requests for this dessert more often than almost any other one I make (the fruit tart is probably number one, but this is a close second).  And for good reason!  It combines three things I love: chocolate, cream cheese, and coffee. 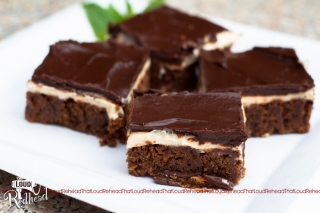 J’nice found this recipe in the November 1991 issue of Gourmet Magazine, and you can find that original recipe here.  She actually gave me a photocopy of the recipe back in 2001, when we were working together, but although I have it somewhere, I couldn’t find it easily, and I’m grateful that Gourmet has it on their site.  I suspect it’s pretty popular!

The only change I’ve made to the original recipe is to omit the nuts, because I’m not a fan of nuts in my brownies (or cakes, or bread–all things that, in my opinion, should not crunch).  Other than that, I just revel in the awesomeness of the sinfully decadent ingredients.  I don’t make these brownies often anymore, simply because they are (gulp) 14 points each, and that’s for a fairly small piece. (That would be 1/16th of the recipe below.)  But as a post-long-run treat, I think they’re perfect. 🙂

I hope you enjoy them as much as I do!  Thanks for stopping by! 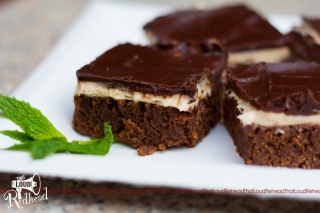 FOR THE BROWNIE LAYER

FOR THE CREAM CHEESE FROSTING*

PointsPlus Value:  Cut into 16 slices, they are a whopping 14 points each.  But totally worth it!!

*Just as a side note, I think this cream cheese frosting would be fantastic if the recipe were doubled and slathered on top of a carrot cake. I love carrot cake but never order it when I’m in a restaurant, because it always has nuts. I have trieed to make it myself a few times but I never seem to get it right. Maybe some day!