I’m a little more rested this week, and my runs have been pretty decent.  I had a great interval run on Monday, which I was able to start after sunrise for a change.  Since it was intervals, I had the chance to snap a few photos during my rest breaks. 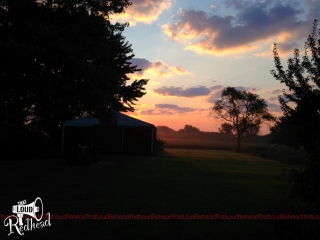 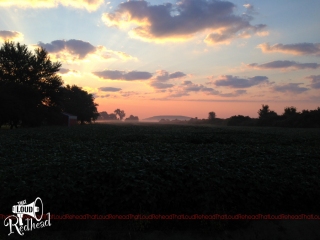 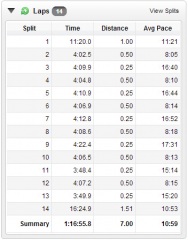 The first couple were a bit fast, but I still struggle with keeping my runs consistent.  I actually started much faster (sub-8!), and I did make a conscious effort to slow down when I realized I was going too fast. I had though I’d only do 6 miles, but due to a miscalculation on my part, I ended up having to do 6.5 total to get back home.  And at that point, I figured it was silly not to knock out another half mile…so I did!  I was pretty impressed with myself for running 7 miles before I even started work. 🙂

I had another early morning 5-miler on Thursday.  It was a full moon, which was pretty neat. 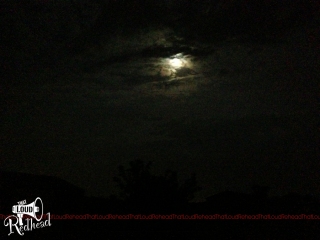 Not the greatest picture, but you get the idea.  😉

This run turned out to be interesting.  People are always asking me why I run when I’m not being chased.  😛  Well for this run, I was being chased–by the garbage truck! You see, when I went out for the run, I got almost a mile down the road when I saw the garbage truck turn the corner–which reminded me that we had forgotten to put out the garbage the night before! I turned around and ran as fast as I could with the sole purpose of getting the garbage out before the truck got to my driveway. I ran a sub-9-minute mile and managed beat the garbage truck.  I was really proud of myself…like I told everyone for the rest of the day: finally, my running paid off with real-world value!  😉

My next run is tomorrow morning, my long run.  This will be my last truly long run before my half in Chicago next month.  I’ll run 12 tomorrow, with 8 at race pace, and then I’ll take it easy next Saturday because it will be tomato canning weekend and I won’t have the time or energy to run long.  (Not to mention, a shorter run will help keep my legs fresh!)  I’m actually kind of looking forward to tomorrow’s run.  After my race-pace struggles of the last month and a half, last Saturday’s run with Katie was a real confidence booster, and I’m anxious to have more success.  I really want to do the entire 8 miles at race pace, and I’m absolutely determined that I will do it. I look forward to reporting on this run next week and telling you how it went. 🙂  It won’t be tomorrow, because after I run 12 miles, I get to go wash cars for a hockey team fundraiser, and then I get to take DS#2 to a birthday party.  I expect to sleep very well tomorrow night. 😉

And now, finally, something I have wanted to write about for several weeks…my dear, sweet, husband. 🙂  As you may know if you’ve been following my blog for a while, I’ve been on my current (and final!) weight loss journey since November 2011.   In that time, my husband has had his struggles with his weight.  We’ve both struggled throughout our marriage with eating healthy and losing weight, but it always seems that when one of us is on the downward trend, the other is on the upward trend.  (I remember very well that when I gained 60 pounds during my first pregnancy, he lost 60 while in the fire academy! 😛 )  Now that I’m really committed to my healthy lifestyle and eating right, I’ve been more worried about my husband and his health.  You know how it is when you finally get healthy–you want those you love to be healthy, too!  Unfortunately, true to our history, it seemed that my weight loss had led to his weight gain. 🙁

I haven’t badgered my husband, but I did make a comment to him many months ago that I was worried about his health.  He was at the heaviest I’d known him to be in the last decade.  He wasn’t ready to make any changes at that time, but back in early May, he bought a set of fitness DVDs (the X-Factor).  I’ve seen him buy these kinds of things before, but his enthusiasm always seemed to wane.  To my surprise, though, he really enjoyed this set!  I personally could never get into fitness DVDs (I’ve tried a few times). I get bored with them easily. 😉   My husband stuck with this set, though…he went through all 8 weeks of it religiously, and he dropped at least 20 pounds.

As he neared the end of the program, he started talking to me about the “Insanity” DVDs.  I was skeptical, because I heard they were really tough, but I could also see that he had the determination this time, based on his success with the X-Factor.  So, for Father’s Day, I bought him the whole set of Insanity DVDs (not cheap!).   He’s been doing them every week except for one week off due to an ankle injury.  I sometimes hear him cursing at the TV when he’s doing them, ha ha, but he sticks with it and is already more than half-way through!

Besides the workout DVDs, he’s also eating much healthier.  He’s a paramedic, so he’s on the go all the time, and usually has to eat whatever fast-food or carry-out he can find.  Lately, though, he’s been making much healthier choices, like salads, and packing Greek yogurt and protein bars for snacks.   He’s lost around 35 pounds, but gained plenty of muscle, and I have to say, he is looking pretty awesome.  🙂  Here’s a picture of him with Jamie from late April, right before he began the X-Factor DVDs. 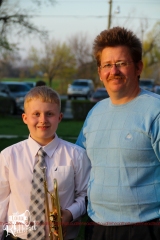 And here is a picture of the two of us taken together earlier this week.

Quite a difference, isn’t it?  I’m so proud of him, and I tell him so all the time.   I love him dearly, and I really love that he’s getting so healthy–and looking so good. 😉

PS: You might recognize that dress if you read Katie’s blog. It’s the one she let me borrow when we talked about my need for a nice sundress during our run last week. I loved it when I first saw her wear it, and I was thrilled that she loaned it to me…and that it fit! 😀

4 thoughts on “My Handsome Husband”